Goole in Bloom’s Annual General Meeting will be held at Junction from 7 p.m. on Thursday 14th September and all are invited to attend and celebrate a superb year.   The announcement of Goole’s award in the Yorkshire in Bloom competition will be delivered along with a presentation of trophies to a range of competition winners. 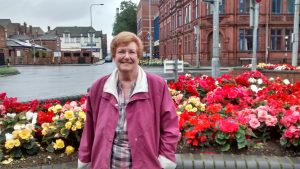 As part of Goole in Bloom’s ‘Going for Gold 2017’ plans Goole’s businesses were invited to enter the Business Premises Competition. Peter Sanderson, Chairman of Business in Goole, was delighted with the entries: “The competition was a great opportunity to celebrate and promote all kinds of businesses. I encouraged business big and small to get involved and I’m delighted our community went above and beyond to support Going for Gold.” Judging took place last month with credit given for originality, variety, colour and impact. Judges assessed the overall condition and maintenance of displays including efforts to overcome environmental difficulties.  The winner will receive a prestigious Goole in Bloom business trophy at the AGM.

This year Goole in Bloom has welcomed the entire community to participate including garden and allotment owners whose efforts were also judged in July. Linda Thornton, Communications Secretary for Goole in Bloom, said “We’ve seen so much variety in colours and planting along with some unique designs and wonderful natural habitats.  Goole’s residents have really done us proud.”  The winners will receive their prizes at the AGM.

Goole’s primary schools were excited to take part in a competition too. The schools considered to have the top four ideas were awarded £250 to help create their horticultural, environmental and gardening projects.  Judging took place in July with two schools, Riverside Special School and Boothferry Primary School, taking joint first prize.

2017 has been a very successful year for Goole in Bloom.  The group aims to continue into 2018 and would like to welcome new members.